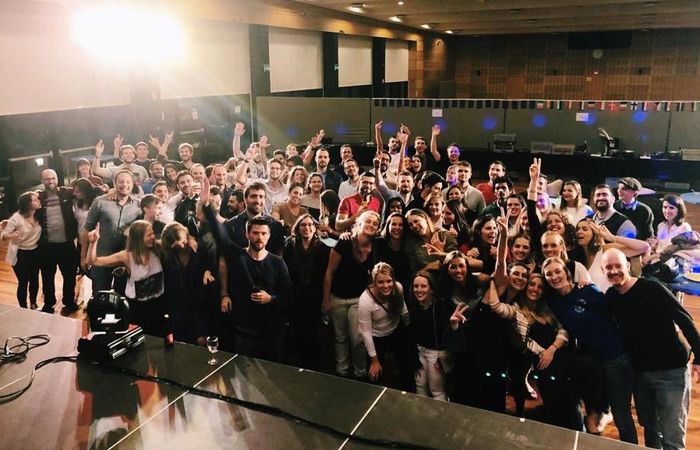 “Well hello there fellow schoolmates! The time that seemed so far away has come. Yes. It's been 10 years since we graduated and we deserve a party for that!”

This is how it all started in September 2017, when a group of us decided it was time to get together again, and see what our fellow graduates from BAC 2008 were up to in their lives.

As a group of three, we put our heads down and got to work with some good old fashioned elbow grease during our free time. Throughout the year since that decision, many meetings took place amongst the organising committee, with the School, the Director, the logistics-guy, the catering company, the band, the DJ, etc.

We managed to contact all the students from our year – even those who had left Woluwé to go to the school of Ixelles when it was built. That was a total of 215 people, of which 204 graduated from Woluwé in 2008. Of those 204, we had a whopping attendance rate of nearly 50%, with a total of 96 alumni answering present to the call to come together again after 10 long years.

The evening started at 19h, and we expected people to start arriving casually late of course, but surprisingly, a good dozen people arrived before we even dimmed the lights! The caterers had set up, we had hamburgers, hotdogs and desserts for all tastes, beers, wine, soft drinks and long drinks; we had a SharingBox booth to make more memories (you can find all the SharingBox pictures here, using the password ec7Z$ to enter: https://bit.ly/2QuxAwG and search #bac2008reunion on all social media), we had a ‘90s cover band, and a ‘90s DJ, and most of all we had each other!

Some had kept in touch, others not; some had flown in from across Europe for the weekend, some had moved back to Brussels after having lived abroad for a few years, some had never left. Whoever it was, those with whom we were close or not during our school years, everybody was happy to see everybody, and it was a gargantuan success!

10 years later, we raised our glasses over our pens in the famous Salle Pollyvalente, where we all had our Baccalaureate exams. A way to bring back memories, and make them better by reliving them. The rest is still the same.

In 2019, the European School of Brussels II, Woluwé, is celebrating its 45 years’ anniversary, and a bunch of us are starting to brainstorm about the best way to bring together all Woluwé Alumni to celebrate the never-ending bonds that tie us together.