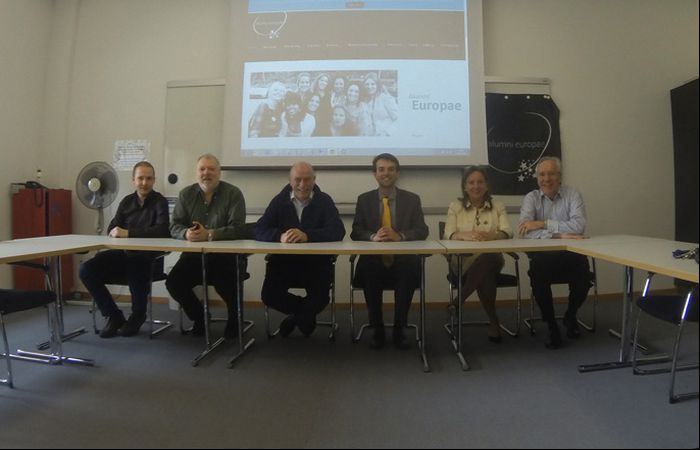 The 2014 General Assembly of Alumni Europae was held on 5 April. The assembly tries to gather every year at a different Eusopean School. This year we were kindly hosted by the the European School in Frankfurt. Many issues were discussed.

The first 1000 members – The assembly welcomed the numerous new members who joined the association during the past year, bringing total membership up to 933, almost 1000. About 200 of those already localised themselves on the world map, thus facilitating other members' information searches on a geographical base. The board will continue to stimulate the use of this powerful tool. The transition from Euresco is completed and one last mailing to former Euresco members will be sent after the GA.

A new chapter ? – In his report to the assembly, the president related about his promising contacts with the association of former students of the Frankfurt ES. The assembly asked Thomas to develop his contacts further and to check if the association would be interested to become a local chapter of AE.

Networking – The assembly approved the board's actions via networks such as StayFriends, LinkedIn , as well as the idea to create a subgroup for entrepreneurs.

Promotion – The assembly congratulated the board for the development of the website and its very practical world wide searching and reporting tools that make the website not only useful for students trying to find their way, but also for sponsors needing to know what has become of the former ES students. AE's database is a major promotion tool to find new sponsors. As for the first 8 newsletters that were published, the assembly noted that every issue was followed by an increase of the membership and encourages all members to post their info's (comments, suggestions, events, requests) to board@alumnieuropae.org.

Events – The party in Brussels was not the biggest success, due to organisational problems. Since there is a clear interest from the members of the association for such events, the assembly asked the board to encourage and support alumni around the world to organise events locally, such as the celebrations of alumni who left their school 10, 25, 50 years ago. The assembly also approved the board's support to initiatives by third parties that promote the same objectives as AE's.

Sponsors – This year, AE has been supported financially by the parents associations of the Uccle, Woluwé and Varese schools (see below under 'Finance'). The assembly congratulated the board with the result and encouraged it to renew the existing support and extend its contacts with other parents associations, including those of the private ESs such as Frankfurt II, as well as other organisations and institutions such as the ES' High Council and the European Central Bank. If sponsorship will allow for more, reporting tools will be further developed according to the sponsors' needs and promotion stepped up.

Finance – In 2013, AE received 390,- euro from membership fees and 6.500,- from parents associations. At the end of the year, there was a net loss of 549,51 euro. Expenses are low: mainly for the development and maintenance of the website (costs spread over a period of 3 years) and for the printing of leaflets. The provisional budget for 2014 aims for 5-6.000, - euro. The 2013 accounts and the 2014 budget were approved and the assembly gave its discharge to the board for the year's exercice.

The Board – Founding member Thomas Fairhurst asked to be relieved from his function as President of the board due to his new professional engagements, but expressed his availability to remain on the board as Secretary. Founding member Karl Sexton, as well as members Salma Saadi and Chiara Gaudenzi Morandi leave the board for the same reason. Board member Olivier Brissaud declared his availability to succeed Thomas, who takes over the function as Secretary from Karl. . Reinhold Ziegler, former student from the ES in Brussels, presented his candidacy to become a board member. The assembly thanked Thomas for all his work and commitment, thanked Salma and Karl, elected Olivier Brissaud as new president, Thomas as new Secretary and approved Reinhold's candidacy. The rest of the board was re-elected. The new board is composed as follows : Olivier Brissaud (president), Thomas Fairhurst (Secretary), Michaël Stenger (treasurer), Joachim Buysse (website manager) and, Alba Morganti ,Reinhold Ziegler and Diederik Bangert (members).